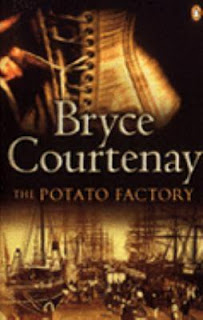 From Courtenay's Website: Ikey Solomon is in the business of thieving and he's very good at it. Ikey's partner in crime is his mistress, the forthright Mary Abacus, until misfortune befalls them.

They are parted & each must make the harsh journey from thriving nineteenth century London to the convict settlement of Van Diemen's Land. In the backstreets & dives of Hobart Town, Mary learns the art of brewing & builds The Potato Factory, where she plans a new future. But her ambitions are threatened by Ikey's wife, Hannah, her old enemy.
The two women raise their separate families, one legitimate & the other bastard. As each woman sets out to destroy the other, the families are brought to the edge of disaster.

What I thought: Finally finished it! I have vague recollections of trying to read this many years ago when it first came out and really struggling with it. As I listened, I tried to remember what my issue was and I think it's this...Bryce Courtenay is very wordy! He seems to take the attitude of why say in 10 words what you can say in 50. He also goes off on little historical jaunts which while may be interesting, do tend to distract from the main story.
I must say though, the person who narrated it, Humphrey Bower, breathed life into this audio book. It's a long listen (almost 24 hours) which means it's essential to have someone who can keep you interested and engaged and not have you drifting off into other thoughts. In the end, I enjoyed the Potato Factory and have downloaded the second in the series, Tommo and Hawk. Here's hoping it doesn't take me quite as long to get through that!