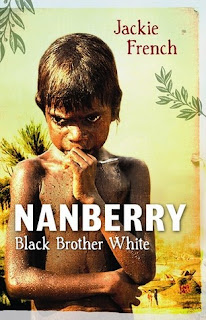 From Goodreads: It's 1789, and as the new colony in Sydney Cove is established, Surgeon John White defies convention and adopts Nanberry, an Aboriginal boy, to raise as his son. Nanberry is clever and uses his unique gifts as an interpreter to bridge the two worlds he lives in. With his white brother, Andrew, he witnesses the struggles of the colonists to keep their precarious grip on a hostile wilderness. And yet he is haunted by the memories of the Cadigal warriors who will one day come to claim him as one of their own. This true story follows the brothers as they make their way in the world - one as a sailor, serving in the Royal Navy, the other a hero of the Battle of Waterloo. No less incredible is the enduring love between the gentleman surgeon and the convict girl, saved from the death penalty, to become a great lady in her own right.

What I thought: This is the sixth and last book from the The Children's Book Council of Australia Younger Reader's Short list and I loved it. Jackie French is such a wonderful, talented author and in Nanberry she brings the early years of colonial life in Australia to life.
Jackie French has done a lot of research for this book. It is based on true events with, of course, French filling in the gaps in research and knowledge. It highlights the difficulties and issues suffered with the coming of Europeans to Australi, without demeaning either the indigenous or European communities. It raises some excellent talking points, but does cover some issues (such as a gentleman having a convict mistress, the 'Rampaging Lusts' of men and the high levels of drunkenness and abuse in the early colony, that I would be concerned about sharing with a younger audience.
Once again, like The Outcasts and Crow Country, it sits on the Teenage shelves at the library I work at. However, unlike those two books, I'm not sure this can cross the boundary of the two categories. The CBC FAQ page states "the YR category covers middle primary to junior secondary" This, I must admit, leaves me feeling confused. I would not class Bungawitta as middle primary - more lower. While Nanberry does fit into this category (just) at the junior secondary end, I'm finding it difficult to compare to something like Bungawitta and wonder how the judges for the CBC manage it. In fact, it makes me wonder with the growth in the number and quality of children's literature whether it's worth the CBC revisiting, renaming and recategorising their awards - but that is probably a whole other post!