Awhile ago now, one of my husband's online friends asked if anyone would be willing to proof read a book he'd written and was planning to self publish in ebook format. I happily said yes and was sent a copy. Now Adrian has taken the step of publishing the book and I'm thrilled to review it! 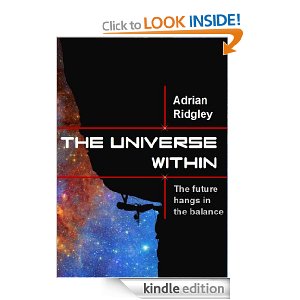 From Amazon: Charles (Chaz) Perez Del Rio is a philosopher, a rockclimber and a geneticist, not necessarily in that order. During a climbing holiday at Mt Arapiles a notion germinates deep within him that he just can’t shake. There is something terribly wrong with the world and the humanity that continues to shape it. So starts a physical and mental journey that Chaz mistakenly believes is of his making. It leads to his discovery of the meaning of it all: all past, all present, all future - everything. He holds the key to mankind’s utopia, a utopia that the universe will share, the future that was always meant to be. But there is a catch - is mankind worthy of the knowing? The alternative is annihilation.
What I thought: First off, little bit of boasting here. My husband designed that cover! The photo is actually of the author, Adrian Ridgley on a climb called Kachoong, a climb that Rockclimbing.com claims is:


The route. The best, most famous, most dreamed about, and most fallen off route in all of Australia.

The Universe Within starts in two parts. The first focuses on The Collective - a collection of entities whose rhythm is being disturbed, not for the first time. But this time, the ripples are noticeable and The Collective needs to work out what to do. The second part focuses on Ridgley's passion - rock climbing. As the novel progresses, these two worlds come together, presenting some really interesting ideas and thoughts.

The rock climbing parts of the book are awesome! Ridgley's love of the sport is clear. His descriptions of not only how the climb is done, but the thought processes involved are engrossing. I finished the book wanting to rock climb. He describes climbs that actually exist, that he has really done, but does warn at the end of the book that these descriptions are NOT to be taken as beta! (See, I picked up some rock climbing lingo...if you're a rock climber, you know what beta means, if not, read the book to find out!) His descriptions have you holding your breath as Chaz reaches for that next hold, or he finds the magical link between the rock and the climber. Fantastic stuff.

The Universe Within is not perfect, but it is well worth the read. It shows an author with promise and will make you wonder about whether knowing the answers to all of the world's ills would be such a good thing after all.

The Universe Within can be purchased for Kindle from Amazon. At only $2.99, it's a bargain!