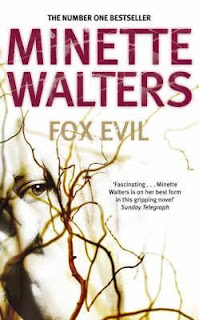 From Goodreads: When elderly Ailsa Lockyer-Fox is found dead in her garden, dressed only in nightclothes and with bloodstains on the ground near her body, the finger of suspicion points at her wealthy husband, Colonel James Lockyer-Fox. A coroner's investigation deems it death by natural causes, but the gossip surrounding James refuses to go away.
Friendless and alone, James and his reclusive behavior begins to alarm his attorney, whose concern deepens when he discovers that his client has become the victim of a relentless campaign accusing him of far worse than the death of his wife. James is unwilling to fight the allegations, choosing instead to devote his energies to a desperate search for the illegitimate granddaughter who may prove his savior as he battles for his name-and his life.

Thoughts: It's rare to find a crime writer who doesn't seem to end up repeating themselves. Minette Walters is one of that rare breed. I think the fact she doesn't write a series with reoccuring characters has a lot to do with it. Her books are stand alones which allows focus on the events in that story rather than getting intertwined with history from previous cases. I also like the fact that she tells her tales from third person point of view. In a crime novel it feels more objective, like you are an observer and are not having what you see tainted by only one persons view.
As with many of her books, Minette Walters has a whole raft of characters you need to keep track of. Some are highly important, some not so much. Half the challenge is working out who you need to keep tabs on and who you can let go. I know some readers find this distracting and difficult, but I love the complexity it adds to the story. As a British writer Walters also uses the psychological aspect of the crime to drive the story a lot more than the non stop action you get in American crime novels. For me it makes the story more complex, more compelling and a lot less formulaic. Walters is an author I need to remember the next time I hit a reading rut. The holes her characters dig for themselves only serve to lift me out of mine.