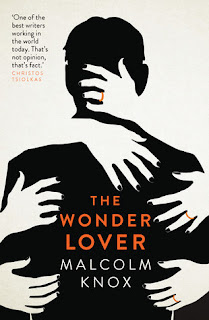 From Goodreads: "The compartments in our father's life were not the separations he needed to build to preserve his sanity. They were his sanity. When he fell in love... when he fell to the abjection he deserved, the walls began dissolving. And once the walls came down between all three, or now four, of his lives, so did every other retaining wall - between past and present, present and future, self- and non-self, dream and wakefulness. The walls were his sanity. Love had driven him mad."
This is the story of John Wonder, a man with three families, each one kept secret from the other, each one containing two children, a boy and a girl, each called Adam and Evie. As he travels from family to family in different cities, he works as an Authenticator, verifying world records, confirming facts, setting things straight, while his own life is a teetering tower of breathtaking lies and betrayals.

Thoughts: In a move to get me out of a reading slump I borrowed three "fastbacks" from the library. A fastback is a 7 day, non renewable loan of high rotation, high interest books. I picked this for no other reason than it looked interesting and it was.
I'm always fascinated by people who live multiple lives. The amount of energy and planning that must go into it is huge! John is exceptionally good at compartmentalising his life into the three separate families he has. To be truthful, he never planned to have three families, it just kind of happened. He has managed to convince himself that maintaining 3 is kinder than breaking up 2, although I'm sure at times he doesn't believe his own rational. To add a fourth relationship into the mix can only spell disaster for an already stretched timetable.
The narrator of the story is one of John's six children talking for all, or all 6 depending on how you look at it. The term "our mother"is used for all three women and thankfully is followed by the name of the mother in question. However, the children and even the wives to an extent, remain shadowy figures in the background of this story. Plausible explanations are given for how each of them believe John's stories of why he is away 2 weeks out of 3 and you even get the feeling he has fallen for women who don't question it too much because they actually prefer it that way.
The book started really strongly for me. I was intrigued, interested and eager to read more. However some where along the line it seemed to loose direction and purpose. It started to meander and I became unsure of the point of the book. In the end it just petered out and left me feeling rather unsatisfied. It has however, seemed to reignite my desire to read. I finished it and immediately picked up something else - something I haven't done for quite awhile.