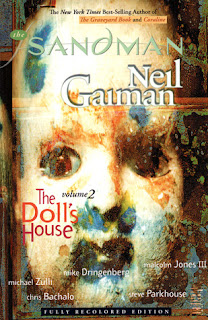 From Goodreads: New York Times best-selling author Neil Gaiman's transcendent series SANDMAN is often hailed as the definitive Vertigo title and one of the finest achievements in graphic storytelling. Gaiman created an unforgettable tale of the forces that exist beyond life and death by weaving ancient mythology, folklore and fairy tales with his own distinct narrative vision.
During Morpheus's incarceration, three dreams escaped the Dreaming and are now loose in the waking world. At the same time, a young woman named Rose Walker is searching for her little brother. As their stories converge, a vortex is discovered that could destroy all dreamers, and the world itself. Features an introduction by Clive Barker. This volume includes issues 9-16 of the original series and features completely new coloring, approved by the author.

Thoughts: There is a dream vortex. An entity that threatens to rip apart the dreamworld and the Sandman's only choice is to find and destroy it. However, the dream vortex is a young woman who has no idea of the damage or danger she is causing.
The Doll's House takes us through some very scary territory. A boy kept in a locked basement, a convention of serial killers and the death of a young woman. This second Sandman volume was stranger than the first -  more story telling, less scene setting. Again, the proof of the strength of the story is it took me 3 days to read, not 3 hours. I'm still amazed at the depth of these graphic novels. I wonder if I will ever read another graphic novel which will impress me as much.
Posted by Unknown at 3:32 PM