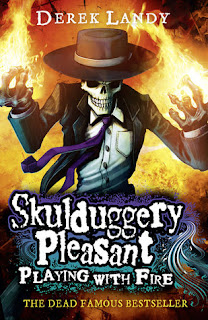 From Goodreads: With Serpine dead, the world is safe once more. At least, that's what Valkyrie and Skulduggery think, until the notorious Baron Vengeous makes a bloody escape from prison, and dead bodies and vampires start showing up all over Ireland.

Thoughts: I listened to this as an audio book through Audible and can I just say, Rupert Degas is a phenomenal narrator. The books are good, but he brings them to life and because of him I know exactly what Skullduggery, Valkryie, China and all the other characters sound like.
Skullduggery Pleasant is one of those rare books that has wide appeal. My nine year old loves it, my thirteen year old loves it and I love it. Landy writes so many layers into these books, there is something for everyone. The kids love the action and the magic. I love the clever language, the witty banter and a solid storyline.
Skullduggery and Valkyrie have the best relationship. Skullduggery is like the cool uncle who takes you places your parents would never, ever approve of. Valkyrie is living this incredible life, but there is that concern about what she is missing out on while she's running around saving the world.
The story is fast paced. You barely have time to draw breath between each crazy situation the characters find themselves in. The wise cracks fly just as thick and fast, leaving you unsure as to whether you should laugh or hold your breath. There is a danger of this series became repetitive - the plots of the first two books don't differ greatly, both are about stopping the baddies bringing back the faceless ones - but I really hope they don't. For now, with Valkyrie still learning to control and manipulate her powers, enough difference is there to get away with it. From this point on though, I'm hoping Landy builds on the brilliant start and doesn't plateau.


Playing with Fire gets 4 stars