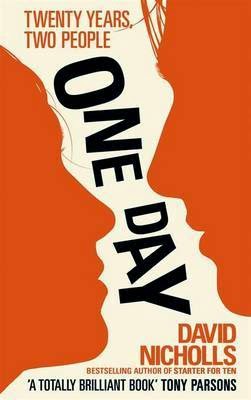 From Goodreads: Emma and Dexter meet for the first time on the night of their graduation. Tomorrow they must go their separate ways. So where will they be on this one day next year? And the year after that? And every year that follows?
Twenty years, two people, one day.

Thoughts: On the last weekend in November, I went away with a fabulous bunch of girls for a weekend of sewing and socialising...maybe a drink or two! One of them, Bec, bought a bag full of books for us to all pick over. Given the ridiculous length of my TBR list, I only had a brief look, happy to let the others have first pick. I did however spot this and grabbed it. I'd heard about it, mostly because a movie has been made based on the book. The idea intrigued me. Two people, twenty years – a snapshot taken of their lives on the same say for twenty years.

I almost gave up simply because of the size of the font – either it was tiny or I'm getting older than I'm willing to admit. Either way, it took me awhile to settle into a rhythm but once I did – oh boy! Could. Not. Put. It. Down! I wanted, no, needed to know what was going to happen. Would Dex and Em end up together? When or why not? How or what stopped them? Would Dex ever grow up? Would Em loosen up a bit? Of course any time one of my questions was answered another dozen were thrown up. There were times I could have easily strangled both Emma and Dexter – they could be equally frustrating for completely different reasons. There was also times I wanted to hug and protect them.
Nicholls has an extensive screen writing history and you can see how this book could easily be translated to the screen. Given he wrote the screen play for one of his previous books (Starter for 10), I would be interested in seeing both movies. I'll also be hunting down his previous books.
Posted by Unknown at 10:31 AM