So here is the last category is the Children's Book Council 2014 short list I am reviewing. The picture book category! Let's get the show on the road right away! 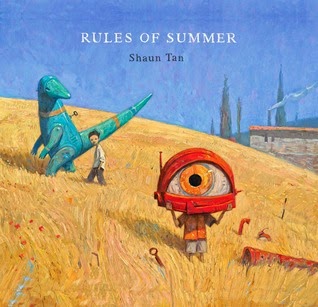 Rules of Summer - written and illustrated by Shaun Tan

You know if it's Shaun Tan you are in for a treat. When you are the youngest sibling, you don't get to make the rules. Even worse, often you don't know what the rules are until you break them, or the rules get changed without notice. And punishment can be swift and harsh. But so can forgiveness.
Rules of Summer is another lush Shaun Tan production with illustrations that are a visual feast, full of imagery and hidden meanings.

The text is deceptively simple, but along with the illustrations can leave the reader full of dread. Spectacular. 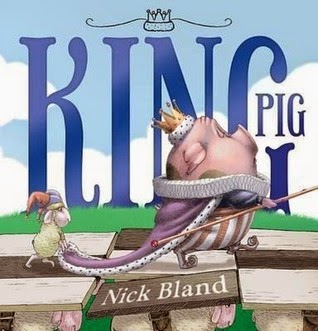 King Pig can make the sheep do anything he wants, except like him, which is what he wants. King Pig is the perfect book to subtitle - a cautionary tale. It encourages self reflection and taking a look to see if sometimes it's your behaviour contributing to the problem.
Ninck Bland's illustrations are great! I've never seen more dejected looking sheep in my life.

King Pig is oblivious to the impact his own behaviour towards the sheep. I like that when King Pig realises what he has been doing and finds a way to say sorry, it doesn't immediately absolve him of all his past transgressions. If he wants the sheep to like him, he is going to have to work at it. As the end of the book said though, It wasn't perfect, but all the sheep agreed, it was a pretty good start. 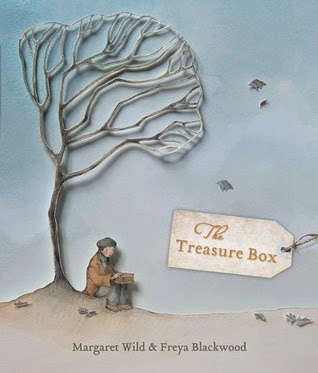 "This is a book about out people, about us," he said. "It is rarer than rubies, more splendid than silver, greater than gold."

This single book is the only one left after the enemy bombed the library and everything burned.
Margaret Wild tells the story of Peter and his father's flight, the hiding of the treasure, the recovery of it and it's return to it's rightful place.
Freya Blackwood's (who also illustrated one the early reader short listed books - Banjo and Ruby Red)illustrations however, make this book incredible. The illustrations are paper collage with objects drawn, cut out and then pasted into a scene. It gives them a 3D effect that combined with the dull colours, truly portrays the despair of the situation.

Throughout the book, certain parts of the illustrations (like the tree above) are constructed from torn book pages which come from foreign editions of Sonya Hartnett's The Silver Donkey and Morris Gleitzman's Once and Then - themselves excellent Australian children's books about World War I and II. The end pages are also covered in these torn pages. This book is a great addition to the body of literature available when discussing war and it's effects on society as a whole. 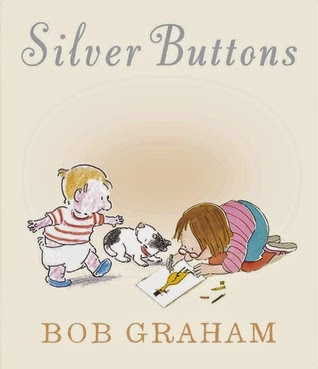 In the moment between Jodie drawing the 2nd silver button on the boots of her duck and her drawing the 3rd silver button, something momentous happens - Jonathan takes his fist step. From there, Graham slowly expands outwards from the lounge room, look at what happens, in gradually widening circles, in that one small moment.
Graham moves the perspective of his pictures from up close to aerial "shots" of the city. Expanding and contracting the view, giving the reader a feeling of scale. The pictures are worth examining as there are often hints or links between them.

The expanded view also allows the reader to gauge how far from the original event they have moved. Silver Buttons is a wonderful study in scale and waht can be happening in one single, precious moment. 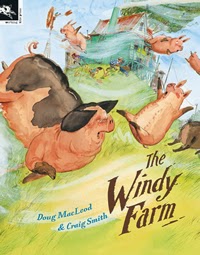 This family lives on the windiest farm on Windy Hill. One day the wind blows half the house away and Rich Uncle Jeff (who has an oil well in his backyard) refuses to help. Then one day they make some wind mills and start farming wind and everything changes!
Doug MacLeod has written a book about clean energy and it is perfectly clear who are the energy baddies and who are the energy goodies. Uncle Jeff (aka the oil companies) is mean and nasty and his pumping of oil is unsustainable. The residents of Windy Farm are lovely and resilient, "Never mind," says Granddad when the house blows away. They show ingenuity and compassion, producing energy that is environmentally friendly and sustainable.
Craig Smith's illustrations are wonderfully chaotic. You can just about feel the wind come off the pages. Uncle Jeff's house is foreboding and the oil well in the backyard is ugly. In the end everyone gets what they deserve and the world gets more green energy. What more could you want! 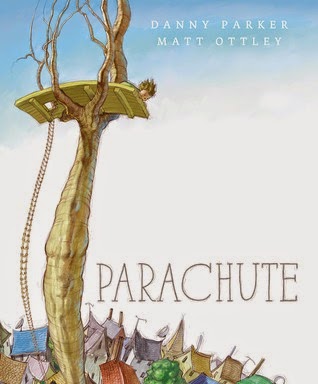 Toby always wears his parachute. It keeps him safe and secure. One day, he lends the parachute to Henry so he can get down from a high place. Then Toby is left alone to get down by himself.
Most kids I know have had a security object - whether it be a blanket, a toy or some other random object. They are important, but as we all know, at some point we have to let them go. This is a lovely book about that letting go process. The beautiful part is how Toby let go of his security object, his parachute to help someone else. It starts a journey of letting go completely, allowing the child to do it in his own time.
Matt Ottley's pictures always delight me. His use of perspective in this perfectly reflects how sometimes, things look bigger and further than they really are. It would be a wonderful book for discussing fear and how I mind can make it seem worse. I also love how Toby talks himself through the fearful situation. The triumph of beating his fear is all his.

So there it is, the 6 short listed picture books! I'll do a post in the next day or two where I will select what I think should be the winner of each category. The winners are usually announced the Friday before Book Week, so that should be Friday 15 August. You can be sure I'll let you know who wins!