From Goodreads: Peter is quick, daring, and full of mischief--and like all boys, he loves to play, though his games often end in blood. His eyes are sparkling gold, and when he graces you with his smile you are his friend for life, but his promised land is "not" Neverland.
Fourteen-year-old Nick would have been murdered by the drug dealers preying on his family had Peter not saved him. Now the irresistibly charismatic wild boy wants Nick to follow him to a secret place of great adventure, where magic is alive and you never grow old. Even though he is wary of Peter's crazy talk of faeries and monsters, Nick agrees. After all, New York City is no longer safe for him, and what more could he possibly lose?
There is "always" more to lose.
Accompanying Peter to a gray and ravished island that was once a lush, enchanted paradise, Nick finds himself unwittingly recruited for a war that has raged for centuries--one where he must learn to fight or die among the "Devils," Peter's savage tribe of lost and stolen children.
There, Peter's dark past is revealed: left to wolves as an infant, despised and hunted, Peter moves restlessly between the worlds of faerie and man. The Child Thief is a leader of bloodthirsty children, a brave friend, and a creature driven to do whatever he must to stop the "Flesh-eaters" and save the last, wild magic in this dying land.

What I thought: The opening of The Child Thief captures you immediately.


It would happen again tonight: the really bad thing. The girl had no doubt. It had started a few months ago, around the time her breasts had begun to develop, and now, with her mother gone, there was no one to stop him.
From her bedroom she could hear him…He was in one of his fits, muttering to himself, cursing the television, his boss, Jesus, but mostly cursing her mother for taking all those pills...There came the sharp snap of a beer tab, then another, and another. Her hands began to tremble and she clutched them to her chest. She wished she could fall asleep…but she knew there’d be no sleep for her tonight.

And you want her to be saved, wanted Peter to intervene and take her away to safety. And he does, but them Brom puts true fear into your heart.


The boy came and knelt beside her. While she cried into her hands, he told her of an enchanted island where no grown-ups were allowed. Where there were other kids like her, who loved to laugh and play. Where there were great adventures to be had…What else did she have to lose?…If the girl could only have spoken to the other boys and girls, the ones that had followed the golden-eyes boy before her, she would have known that there is always something left to lose.

Could where she is going possibly be worse than where she already is?

And thus the tone for the book is set - one minute Peter is a saviour, the next a devil. What of his own tortured past has lead him down this path?

Brom wrote this after reading the original J.M Barrie book - not the sanitised Disney version - of Peter Pan. The one in which Barrie writes:

The boys on the island vary, of course, in numbers, according as they get killed and so on; and when they seem to be growing up, which is against the rules, Peter thins them out.

"I forget them after I kill them" he (Peter) replied carelessly.

A lot darker than you remember? Yep, me too!

From this Brom leads us through a world that is magical, but with a darker side. Are the children who are there, there voluntarily or have they been brainwashed? And why is Avalon - the home of faeries and magical creatures slowly dying? What is the price of saving it?

The artwork in this is spectacular. You can check out more of it on Brom's homepage, but these would be two of my favourites. 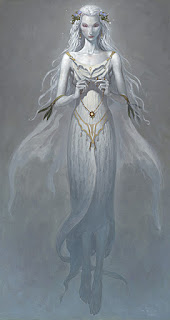 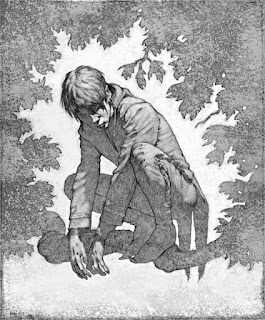 The Child Thief is dark and horrifying. In the space of one page I would be disgusted by Peter and then feel a heart wrenching sadness for him. Brom has weaved a tale that I think is closer to Barrie's true vision of Peter Pan - a vision Disney and it's like have strived to keep out of sight. By using aspects of Welsh mythology, Brom has made the tale of Peter his own, setting it in a framework that allows it to fit seamlessly into today's world - a world with many lost children looking for love and acceptance in the wrong places.