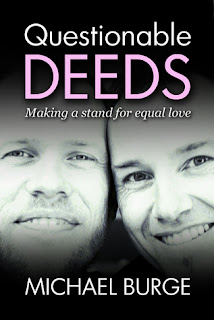 From Goodreads: One random night in 2004, Michael Burge’s long-term partner, choreographer Jonathan Rosten, died suddenly while rehearsing a show. In the midst of the ensuing grief, Jono’s relatives started the secret and devastating process of disenfranchising Michael from his position as Jono’s next of kin.
With his name removed from Jono’s death certificate, Michael found himself unable to wrap-up his de-facto partner’s affairs; in a legal, ethical and financial ‘David and Goliath’ battle that was none of his making.
Exiled from his own life, facing grief, depression and suicidal thoughts, Michael eventually found the courage to fight back.
Along the way he came face-to-face with his own demons, and those of the generation that faced HIV/AIDS and the ensuing legislative no-man’s land which saw many de-facto couples disenfranchised by homophobic families.
Through asserting his right to grieve the loss of his partner, not only personally, but on a public and legislative level, Michael’s story offers a rarely heard, surprising and honest voice for all Australians dealing with loss.
Set against a country coming to terms with the human rights and responsibilities of same-sex equality, Questionable Deeds offers one man’s argument for marriage equality and why it’s a no-brainer for any 21st century nation.

Thoughts: I've long been a believer in same sex marriage. My attitude has always pretty much been one of love is love and therefore you should have the same rights, no matter who you love. After reading this book it becomes more than apparent why equal rights to marriage is not just desirable, it's essential. One little bit of paper, a bit of paper I have somewhere in my house and barely think about, would have saved Michael the grief of being made a non entity in his beloved husband's life on top of the grief of losing him. One. Piece. Of. Paper.
Questionable Deeds is raw. Michael pulls no punches, hides nothing from the reader. His grief is devastating, leaking out of the pages as he struggles to understand what is happening and why. His anger is palpable, driven by his confusion about events he should have control of but doesn't. His skill in extrapolating his experience to the lives of those around him and his subsequent drive to make sure his story is not someone else's shows you the true measure of this man.
The attitude and actions of Jono's mother and brother astound me. Try as I might, I cannot wrap my mind around why you would want to deny such a large part of your child's life. I struggle to understand people who feel that a gay child is a failure - either of the child or the parent. A child who has no compassion, no empathy - that is a failure. A child who meets and builds a life with someone they love - that is a success. Michael is a bigger person than me as he at least tries to understand Jono's mum's point of view and actions. His final decision in how to end the impasse amazing.
I'm lucky enough to know Michael. We live in the same community and have had a handful of conversations and interactions which have been thought provoking and insightful. It's always a bit daunting  reviewing a friend's work, but  reading Questionable Deeds was a great privilege and has simply confirmed for me the principled person Michael is.
Questionable Deeds should be read by anyone who has any doubts as to the importance of same sex marriage. The existing laws are not enough - they didn't help Michael. One piece of paper that hurts no one, but could save someone from an incredible amount of pain is all we need.