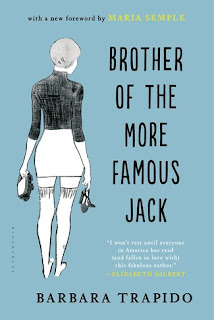 From Goodreads: Ask today's favorite novelists what books influenced their writing and you'll hearBrother of the More Famous Jack again and again. Dog-eared copies of this long out-of-print novel are highly prized and shared enthusiastically in literary circles-its return to print is cause for celebration.
Stylish, suburban Katherine is eighteen when she is propelled into the heart of Professor Jacob Goldman's rambling home and his large eccentric family. As his enchanting yet sharp-tongued wife, Jane, gives birth to her sixth child, Katherine meets beautiful, sulky Roger and his volatile younger brother, Jonathan. Inevitable heartbreak sends her fleeing to Rome, but ten years later, older and wiser, she returns to find the Goldmans again.

Thoughts: This was our book group read for October. After I finished it, I though - meh - interesting, but nothing spectacular. Then I started to think about what I would say about it at book group and suddenly discovered the book had infiltrated me in a way I didn't expect. There was a lot more to it than I first thought.
Trapido follows Katherine from a young, fairly innocent girl, through young love, heart break, years of discovering what she loves and a rediscovery of love and friendship. Like life itself, this book meanders along and the big events are not realised as big events until they are after. You know what I mean, the times when something happens and later on you look back and realise how momentous it was. Through the book you can hear Katherine's voice mature, her mature and grow. You can feel the effect events have had on her and the way she has had to deal with them build her into the person she is. I love her connection with Goldman's and the way they seem to need her just as much as she needs them. This book is full of surprising characters that speak to you more than you realise. At only 256 pages it's not a long read and one that I feel may be well worth revisiting.

Brother of the more Famous Jack gets 4 stars.