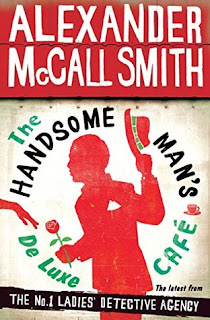 From Goodreads:Even the arrival of her baby can't hold Mma Makutsi back from success in the workplace, and so no sooner than she becomes a full partner in the No. 1 Ladies' Detective Agency (in spite of Mma Ramotswe's belated claims that she is only 'an assistant full partner'), she also launches a new enterprise of her own, the Handsome Man's De Luxe Café. Grace Makutsi is a lady with a business plan, but who could predict temperamental chefs, drunken waiters and more? Luckily, help is at hand, from the only person in Gaborone more gently determined than Mma Makutsi . . .

Thoughts: Back with Mma Ramotswe, Mma Makutsi  and the rest of the gang! I haven't read a book in this series that I thought was a bad book. I think one of the secrets is there is time between each one so you are not overloaded. With several series on the go, I think McCall Smith can afford to leave one series until something worth writing occurs to him rather than trying to pump out book after book with the same characters.
I love Mma Ramotswe's calm patient way of looking at things. Her heart is so big and she truly wants the best outcome for everyone. She has little sympathy for those who do the wrong thing out of pure malice, but believes there is good in most people.
In the more recent books I'd found Mma Makutsi had mellowed a bit and become not so righteous and annoying. In this book however she is back in full swing! Swelling with her own importance as she is promoted to business partner and her decision to open her own cafe. She goes on to make poor Charlie's life a misery and make some not so good business decisions - decisions that had anyone else made they would have earned her derision quick smart! As always though, she can't be told and is not incredible grateful or chastened when helped out or proven wrong.
These books are not heavy reads. They are great holiday of light-after-dark reads. They are comforting because nothing changes too much although they manage to maintain a level of freshness and interest.