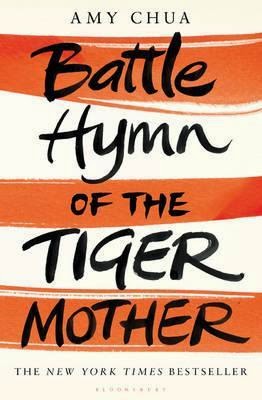 From Goodreads:An awe-inspiring, often hilarious, and unerringly honest story of one mother's exercise in extreme parenting, revealing the rewards-and the costs-of raising her children the Chinese way.
All decent parents want to do what's best for their children. What "Battle Hymn of the Tiger Mother" reveals is that the Chinese just have a totally different idea of how to do that. Western parents try to respect their children's individuality, encouraging them to pursue their true passions and providing a nurturing environment. The Chinese believe that the best way to protect your children is by preparing them for the future and arming them with skills, strong work habits, and inner confidence. "Battle Hymn of the Tiger Mother" chronicles Chua's iron-willed decision to raise her daughters, Sophia and Lulu, her way-the Chinese way-and the remarkable results her choice inspires.
Here are some things Amy Chua would never allow her daughters to do:
? have a playdate
? be in a school play
? complain about not being in a school play
? not be the #1 student in every subject except gym and drama
? play any instrument other than the piano or violin
? not play the piano or violin
The truth is Lulu and Sophia would never have had time for a playdate. They were too busy practicing their instruments (two to three hours a day and double sessions on the weekend) and perfecting their Mandarin.
Of course no one is perfect, including Chua herself. Witness this scene:
"According to Sophia, here are three things I actually said to her at the piano as I supervised her practicing:
1. Oh my God, you're just getting worse and worse.
2. I'm going to count to three, then I want musicality.
3. If the next time's not PERFECT, I'm going to take all your stuffed animals and burn them!"
But Chua demands as much of herself as she does of her daughters. And in her sacrifices-the exacting attention spent studying her daughters' performances, the office hours lost shuttling the girls to lessons-the depth of her love for her children becomes clear. "Battle Hymn of the Tiger Mother" is an eye-opening exploration of the differences in Eastern and Western parenting- and the lessons parents and children everywhere teach one another.
Thoughts: BHOTTM is one of those books I'd heard about but wasn't sure if I wanted to read it. I knew it had the potential to make me angry - throw the book across the room angry - but as I was shelf checking at work one day, I came across it, pulled it off and read the first couple of pages - and then borrowed it.
BHOTTM is a  bit like a train wreck, you want to stop looking but you can't. For me there was a lot of head shaking, incredulous laughing and just plain astonishment. Tiger mother parenting is a lot different from my brand of parenting.
But here's the thing, Amy Chua truly believed she was doing the best for her child. She admits her methods were extreme, but for her, that was what she believed was best. Part of me has to admire a woman who can continually go head to head with a child who clearly does not want to do what she is being made to do. Another part has to admire a woman who keeps going despite all those around her questioning and doubting her methods. I also admire her no apology approach to writing this book. She is not looking for the readers acceptance or validation, she is simply relaying what she did as a parent and her reasons for it. If you don't agree with it, fine, but don't expect her to agree with you either. As to the long lasting effects of her parenting methods on her kids - who knows. None of us know how our parenting will affect our kids until it's too late to undo any supposed damage we do. For me, where I think Chua goes wrong is in thinking what works for one child will work for the other.
So I don't agree with Chua's parenting model, but I don't doubt she loves her kids and did what she considered best for them. What really got my back up in this book is her belief that she is right and her method is the only way. I may have been reading it wrong, but what came across to me was that by not raising my child the "Chinese" way I am guaranteeing my child will not be as happy or successful as her children. My children will be incapable of reaching their full potential because I do believe it's important they have sleepovers, watch TV, play computer games, choose their own extra curricular activities. I don't believe the world ends because they don't get an A or play a musical instrument.
Does Chua love her kids? Yes. Did she do what she believes is best? Yes Are any of us the perfect parent? No. Is her way the only way to raise successful kids? No. Should you read this book? Hmmm, hard to say. If you do, be prepared to be challenged , frustrated and angry.
Posted by Unknown at 11:50 AM