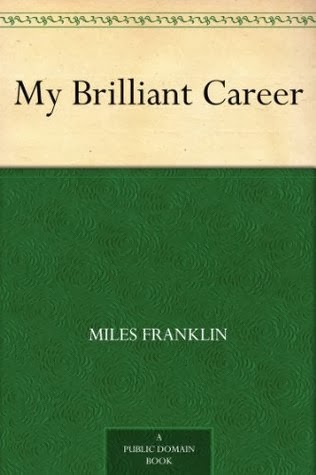 From Goodreads: This classic Australian novel was written by Miles Franklin, and details her life being born of the bush in Australia. A fantastic, well-written book with lively descriptions of a girl's life that can't be passed up by anybody who is drawn by good stories with captivating details. This novel should be required reading by anyone interested in Australia or important female writers and novelists in history.
Thoughts: I read this as part of my 100 Best Books List Challenge, covering the Australian category.
This is one of those books taht as an Australian, I have heard about over the year but somehow have never picked it up or had it set as  a text at school. Most probably the most surprising thing for me was the ease with which it was read. Franklin's writing is light and breezy, but not trivial.
Sybylla is a wonderfully complex character. I loved her refusal to compromise, to become someone she knew she wasn't. Her determination to follow her own path obviously made her mother and grandmother despair!  Given it's setting of the late 1800's, she set herself a very difficult path being against marriage (for herself) and an atheist. You want a strong female character? You've got one here! On the other side she has plenty of self esteem issues. She constantly refers to herself as ugly, stating no-one could want someone as ugly as her. This continues even when others disagree with her. It's not helped by her mother though who is more than eager to agree. I read one review which suggested she seem to have manic depressive traits - high highs and soul destroying lows - and I can agree with that point of view.
Written when she was just 16 and published when she was 21. My Brilliant Career is a literary feat way beyond the author's years. The speculation around whether the book was autobiographical caused her much grief and she put off the publication of the sequel - My Career Goes Bung. I glad she did publish it, as I look forward to read it and other titles from one of Australia's greats.

Challenges: 100 Best Books List Challenge
Posted by Unknown at 9:25 AM