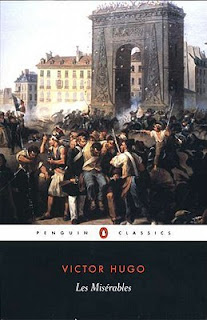 From Goodreads: Introducing one of the most famous characters in literature, Jean Valjean - the noble peasant imprisoned for stealing a loaf of bread - Les Misérables (1862) ranks among the greatest novels of all time. In it Victor Hugo takes readers deep into the Parisian underworld, immerses them in a battle between good and evil, and carries them onto the barricades during the uprising of 1832 with a breathtaking realism that is unsurpassed in modern prose. Within his dramatic story are themes that capture the intellect and the emotions: crime and punishment, the relentless persecution of Valjean by Inspector Javert, the desperation of the prostitute Fantine, the amorality of the rogue Thénardier and the universal desire to escape the prisons of our own minds. Les Misérables gave Victor Hugo a canvas upon which he portrayed his criticism of the French political and judicial systems, but the portrait which resulted is larger than life, epic in scope - an extravagant spectacle that dazzles the senses even as it touches the heart.

Thoughts: Les Miserables is over 1200 pages. It's a big ask to read, so I am breaking it down into smaller parts reading and reviewing each volume (there are 5), most probably with a break in between each one. You can read my review of book 1: Fantine, here.

Book two sees us investigate Cosette's life with the Thénadier's and her rescue from them by Jean Valjean. It also includes a looooooooong history of the battle of Waterloo and various other events that are not actually part of the story. As such I ended up skipping large chunks. While I do worry I may miss things by doing this, I know that if I don't skim over the bits I find tedious I won't read the book at all.
This part of the story fills in a large chunk of what was missed in the movie and the musical - the intervening years between Cosette being taken from the Thénadier's and her reaching adulthood. The length of the book does mean it's impossible for the makers of the movie and stage production to include everything and I admit I don't feel that anything that happened here was necessary to the story.

This takes me to 40% of the book - almost half way! Hopefully there won't be as big a gap between this and the next book Marius.