Book Review - Pulling Down the Stars 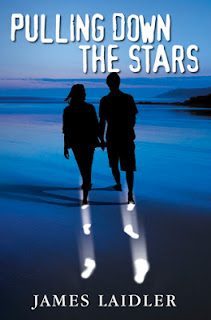 From Goodreads: Charlie Lansdowne’s life is going nowhere ... fast.
Trapped at home with his eccentric father and his stroke-affected grandfather, he finds life a daily exercise in dysfunction as three generations of men strive to get along.
But when Charlie meets the volatile and tempestuous Maxine – a surfer girl who works at the local abattoir – his life goes supernova. Friendships implode, passions ignite and death comes stalking in the night.
Set in the seaside country town of Warrnambool, this is a contemporary Australian thriller likened to 'Jasper Jones'

What I thought: Back in May 2011 I reviewed a book called The Taste of Apple by James Laidler. I loved it and was thrilled when the author contacted me and asked if he could use my review on his website. (for the record, I said yes.) I was even more thrilled when he contacted me again late last year and asked if I would like an arc copy of his new book. Again I said yes and just before Christmas, Pulling Down the Stars landed on my Kindle.

First off, can I just say I love the cover! Almost makes me wish I owned a hard copy - but lets face it, it's what's inside that counts.  From the opening chapter where we meet Charlie as he baths his invalid grandfather, I wanted to know more. More about Charlie and his dad, more about how Maxine and Charlie cross paths, more about Bill and his...lets just say more about Bill.

There is a thriller element to this book, but it is so much more. In fact, the thriller aspect can be forgotten at times and then, when your drifting along nicely in the story, you're brought back to the darker side, rocketing back like an elastic pulled tight and then released.  Each of these thriller moments are short, like a quick glimpse into the side of life we don't want to acknowledge is there. We turn back to the light, but with the thought in the back of our mind that things may not turn out the way we want.


Laidler's strength lies in his characters. Both Maxine and Charlie are looking for direction in their lives, but come from very different backgrounds. Maxine with her privileged up bringing resents  her parents, rebelling against her mother's  expectations and her father's infidelity. Charlie has spent his life aware that his birth caused his mother's death, leading his grandfather into alcoholism and his father's servitude to the old man. I felt for both of them and the other characters caught up in this tale. The strength of the characters and the readers empathy for them carried the book in areas where the story wasn't quite strong enough. At times issues seemed to be resolved rather abruptly with little or no lasting effect (such as Charlie's falling out with his best mate).

Unlike The Taste of Apple, which was written in verse, Pulling Down the Stars is prose. Yet in some of the text, that lyrical, poetical feel is obvious.

I am all at sea.
First there's the surge, followed by the rush, as lying on my surfboard my hands excavate the water - fingers panning for hold.
I am all at sea,
feeling the lactic burn across my shoulder blades and the slow building elevation from behind.

The moments Laidler hits these lyrical bits are the best bits. They provide strong imagery, clear pictures of the characters and an ebb and flow that carries the reader easily, leading them further into the story.

All in all I enjoyed Pulling Down the Stars and would recommend it, especially older teenagers looking for that bridge between young adult and adult books.

Many thanks to the James Laidler and Hybrid Publishers for providing me with a copy to review. All views in this review are mine and mine alone!