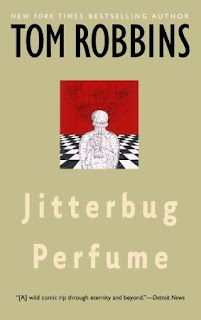 From Goodreads: Jitterbug Perfume is an epic.
Which is to say, it begins in the forests of ancient Bohemia and doesn’t conclude until nine o’clock tonight (Paris time).
It is a saga, as well. A saga must have a hero, and the hero of this one is a janitor with a missing bottle.
The bottle is blue, very, very old, and embossed with the image of a goat-horned god.
If the liquid in the bottle actually is the secret essence of the universe, as some folks seem to think, it had better be discovered soon because it is leaking and there is only a drop or two left

What I thought:  The only way I can think to describe this book is a romp through the ages! It starts with three perfumers in three very different situations and then flashes back to a King who is about to lose his kingdom all because of a gray hair! Robbins leads you on an intriguing, at times erotic, at times funny, frequently confusing journey as the secret to long life is looked for and almost grasped.
It took me awhile to get into this, and it truth this was most probably my 2nd or 3rd go at it. It is well worth persevering with though and is a book that I can see myself picking up again sometime in the future.

Challenges: What's in a Name
Posted by Unknown at 3:23 PM