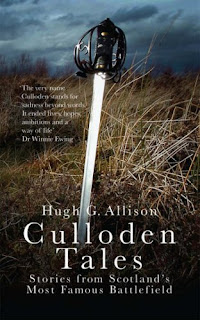 I've been fascinated with Culloden ever since I read Cross Stitch (aslo published as Outlander) by Diana Gabalon. I would love to go to Scotland if for no other reason than to stand on Culloden Moor and pay my respects to those men who charged a bigger, better armed force and were mowed down.

Hugh G Allison works at the visitors centre at Culloden and often hears stories from visitors about their ancestors. From this he was inspired to write this book, to bring to life some of those tales.

He starts by looking at the history of Culloden the Scottish Highlanders support for Bonne Prince Charles. He then takes a look at the different clands who were represented at Culloden, their history and how they came to be standing on that battlefield. The third section, and in my opinion, the most interesting, was the tales themselves. These were collected from visitors, people who work at the site and others with an interest in Culloden and it's history.

For me this has whet my appetite for more. I find it hard to read history books, they are often dry and dull, taking what should be an exiciting and thrilling read into the grounds of drudgery and boredom. I think it's why I like a lot of my history presented in a fictional form. (Think Sharon Kay Penman) For me, this was better than most history books I've read, but has definitely left me wanting more.
Posted by Unknown at 11:15 AM