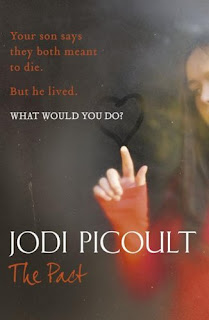 The Pact by Jodi Picoult

I chose this book for our book group to read. I have read it before and enjoyed it and thought it would bring up some good discussion.

Until the phone calls came at 3:00 A.M. on a November morning, the Golds and their neighbors, the Hartes, had been inseparable. It was no surprise to anyone when their teenage children, Chris and Emily, began showing signs that their relationship was moving beyond that of lifelong friends. But now seventeen-year-old Emily has been shot to death by her beloved and devoted Chris as part of an apparent suicide pact -- leaving two devastated families stranded in the dark and dense predawn, desperate for answers about an unthinkable act and the children they never really knew.

I know this is one of the first Jodi Picoult books I read and I remember being bowled over by the twist. Any one who has read a few of Picoult's books know there is always a twist. I only vaguely remembered what the actual twist was this time, but was still taken back by it a bit when it came.

For me, this is one of Picoult's earlier books. The mothers in this are less objectionable to me than mother's in later books. I often find myself getting incredibly annoyed with Picoult mothers who routinely ignore any other child they have for the one who has the "issue."

Picoult keeps the book moving along. You never have time to stop and wonder too much as you want to reach the end, you want to know what happens. As you read, you realise things are not all they seem and there is great danger in placing expectations on your children. I can't say too much else without revealing too much about the book, so I have started a spoilers page. If you want to read more, click here, but be warned - there are big spoilers there!
Posted by Unknown at 10:55 AM