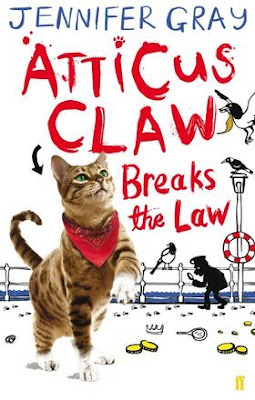 From Goodreads: Meet Atticus Grammatticus Cattypus Claw, the world's greatest cat burglar. He's a tabby who spells trouble. And he's been hired by the fiendish Jimmy Magpie to steal all the jewels in Littleton-on-Sea.
Atticus needs a temporary home - preferably one with lots of sardines provided. But when he adopts Inspector Cheddar and his family, Atticus starts to wonder, is a life of crime really for him?

Thoughts: One of the aspects of my job that I love is running kids literary events. Once a month we run a kids book club, aimed at primary aged children in an attempt to engage with and widen their reading experiences. In January my colleague and I ran the book club based on the Atticus Claw series. I hadn't read any, so thought I should have a go at least one!
Atticus is a pretty cool cat. He goes from a life of crime and loneliness to being a crime fighter with a family. The villains, in the form of some dastardly magpies are brilliant. I love the fact Gray has created a world where it is perfectly acceptable to arrest animals for crimes.
There is a lot of pulp out for kids at the moment. Mass produced mega series (think Rainbow Fairies or Zac Powers) which do have their place. I do truly believe that any reading is good reading for kids, but it is really nice to come across something that I think will have mass appeal to kids and is well written. I'm not sure I'll read any more of Attius Grammatticus Cattypus Claw's adventures - I'm not really a cat person - but they have definitely been added to my list of suggestions for when library patrons ask what's a good thing for my child to read!
Posted by Unknown at 8:27 AM