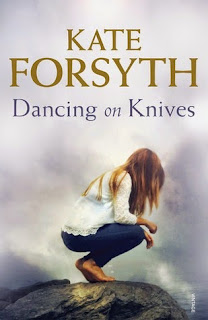 From Goodreads: A damaged family and their generations of dangerous secrets
At twenty, Sara is tormented by an inexplicable terror so profound she hasn't left her home in five years. Like the mermaid in the fairytale her Spanish grandmother once told her, Sara imagines she is Dancing on Knives, unable to speak. She feels suffocated by her family, especially her father – the famous artist Augusto Sanchez – whose volcanic passions dominate their lives.
Then one stormy night, her father does not come home. His body is found dangling from a cliff face. Astonishingly, he is still alive, but the mystery of his fall can only be solved by the revelation of long-held family secrets.
At once a suspenseful murder mystery and a lyrical love story, Dancing on Knives is about how family can constrict and liberate us, how art can be both joyous and destructive, and how strength can be found in the unlikeliest places.

Thoughts: I ended up doing a bit of extra work shelving at a different library the other week. It's the largest library in the network I work in and it interesting to see how such a big space works. While shelving I came across this. I'd never seen or heard of it before so my immediate thought was it was brand new Kate Forsyth. I loved The Wild Girl so I immediately put it to one side to check out.
Sitting on the train later I pulled it out, read the author's note and the apprehension started. Basically Dancing on Knives is an old book of Forysth's and has undergone many reincarnations in it's life. The scribblings of a sixteen year old, the thesis of a twenty six year old, a published novel under a different title. My misgivings came from the fact that when I've often gone back and read the earlier works of an author it becomes apparent why that book was not their break out novel. In fact it is often incredibly disappointing. Nevertheless, I resolved to give it a go.
First things first. If you have read and loved The Wild Girl, don't expect the same type of book. Dancing on Knives is completely different. Having said it's good. Not Wild Girl good, but worth reading. It's storyline follows Sara, a twenty year old held hostage by her inability to leave the house and by the family where she has been the mother figure since her own mother died. Her father's unpredictable mood swings clash with her older brother's need to provide some stability, leaving Sara in the middle trying to keep the peace and the family together.
Forsyth writes rich characters. You can see Sara's fears and apprehension, feel the tempest in the house when Augusto is raging, hear the tiredness and weariness in Joe's voice. At different stages through out the book you want to slap each of them, plus the other characters.
Forsyth's writing is lyrical. poetic.

Sara has often thought that most people seemed to live their lives only splashing about in the shallows. But she...she was dragged down into the fathomless depths again and again, where no light struck and hideous monsters of the deep swam. She tried so hard to stay where she could touch the sane with her feet. But always she was swept out, always she was sucked under.

You do start to despair of this family ever untangling itself, but Forsyth slowly and painfully brings them to a point where you can glimpse a possible happy future, if only they will grab it.