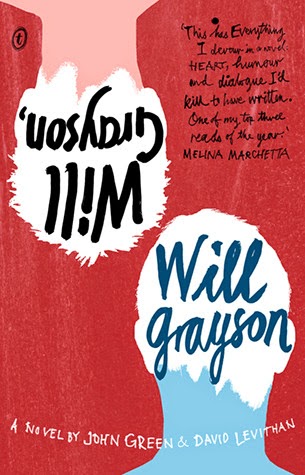 From Goodreads: Will Grayson meets Will Grayson. One cold night, in a most unlikely corner of Chicago, two strangers are about to cross paths. From that moment on, their world will collide and Iives intertwine.
It's not that far from Evanston to Naperville, but Chicago suburbanites Will Grayson and Will Grayson might as well live on different planets. When fate delivers them both to the same surprising crossroads, the Will Graysons find their lives overlapping and hurtling in new and unexpected directions. With a push from friends new and old - including the massive, and massively fabulous, Tiny Cooper, offensive lineman and musical theater auteur extraordinaire - Will and Will begin building toward respective romantic turns-of-heart and the epic production of history's most awesome high school musical.

Thoughts: I did hear about this book way back in 2010 when it came out, although I heard more about David Levithan at that stage than John Green. I even read one of Levithan's books - Love is the Higher Law and really enjoyed it.
For me, the idea of two authors writing a book together is a thing of intrigue. I imagine it's a bit like team teaching with someone - it either works really well or is a total disaster! This and Good Omens and two that work very well. Pratchett and Gaiman said that they wrote Good Omens with a lot of emails and phone calls. I would love to see those emails, I think they would be hilarious. Similarly I think Green and Levithan's conversations about this book would be incredibly interesting.
For two writers who have fairly different writing styles, they choose a fairly safe path. Writing alternative chapters, each author writing the POV of one of the Will Grayson's. And for anyone who has read either of these authors, it wasn't hard to pick who was who.
Green's Will was, as many of Green's main characters are, intelligent, nerdy, but part of a really solid friendship with a few other slightly out of the box kids on the edge. They don't fit in, but they don't really want to so that is ok.  Levithan's Will is much darker - suffering from depression and self imposed isolation, the one friend he seems to have is basically a conniving bitch. Both have aspects that I think teens would identify with. Eventually their paths cross and they end up sharing a friendship with the hugely flamboyant and ridiculous Tiny. The book provides some truly hilarious moments,  ones where I found myself laughing out loud. It also has moments where your heart aches for Will Grayson (Both of them.)
I found Levithan's Will slightly harder to read for a couple of reasons. Obviously as a way to distinguish between the two Wills, Levithan's chapters are written completely in lower case. no capital letters at all, for anything. lower case i's, lower case names, everything. i hate it. if you are going to need to distinguish your text, do something like use italics, or a different font. Don't go abusing grammar! I read a review where someone said Levithan did it because his Will "is a lowercase person. His whole self image is what he projects in that space, and his one comfortable form of communication is when he's anonymous and sending instant messages." I'm sorry, I'm not buying it. I think Levithan managed to portray that about Will without making it difficult for an old fuddy duddy like me to read.  Which brings me to the second reason I think I found Levithan's Will hard to read - he was so raw. Will was suffering from depression - proper, true, there is nothing good about me,  I can't get out of bed without medication depression. And Levithan writes it so well.
Will Grayson, Will Grayson is worth the read. In a market that is becoming increasingly saturated with substandard pulp fiction , Levithan and Green are making YA credible.