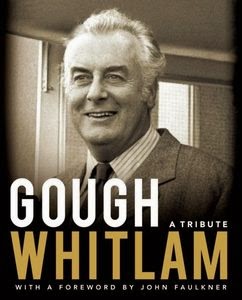 From ABC Shop: An all new photographic tribute to a giant of Australian politics.

When Gough Whitlam died on 21 October 2014, his legacy to the Australian people was a nation transformed. With all royalties going to the Whitlam Institute, this tribute traces his extraordinary life through the photographers' lens from his childhood and meeting his great love Margaret, to the soaring successes and shattering defeats of his political life and his ongoing enthusiasm for the great cause of a fairer, more mature Australia.

Thoughts: This was a chance find. It simply came through the return chute at work and it appealed to me. I grew up in a very left wing house. Not surprisingly then, my own politics have a strong left lean to them. While I don't have a living memory of Gough Whitlam as Australia's Prime Minister (I was three when he uttered those immortal words, "Well may we say God Save the Queen, for nothing will save the Governor General!) my mother was a staunch supporter of him. My sister benefited from his belief that education was a right, not a privilege and studied her university degree under the no fee system introduced by the Whitlam government. Like or hate him, you have to admit the man had presence and his career will be forever talked about by both sides.
Each of the pictures in the book had a commentary about it - what it was, when it was taken and the significance of it - whether it was a family photo or Whitlam meeting international heads of state. It is unashamedly pro Whitlam. It focuses on his strengths, his desire to bring about radical change and his role as one of the first in government to lever the press in his favour.
If you want a snap shot of Whitlam, his life in and out of politics, you could do worse than this book. As for me, it has feed a desire to read something more in depth about this great man.