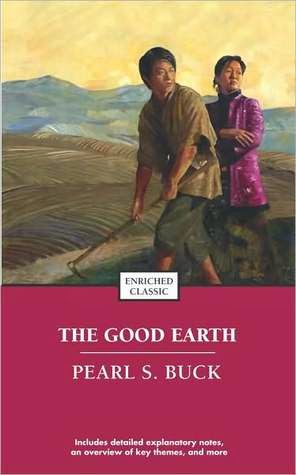 From Goodreads: This tells the poignant tale of a Chinese farmer and his family in old agrarian China. The humble Wang Lung glories in the soil he works, nurturing the land as it nurtures him and his family. Nearby, the nobles of the House of Hwang consider themselves above the land and its workers; but they will soon meet their own downfall.
Hard times come upon Wang Lung and his family when flood and drought force them to seek work in the city. The working people riot, breaking into the homes of the rich and forcing them to flee. When Wang Lung shows mercy to one noble and is rewarded, he begins to rise in the world, even as the House of Hwang falls.
Thoughts: This is our book group book for November. For various reasons we skipped October - it just became too hard to set a date! I will admit that I started to read this with absolutely no idea what it was about. The cover of my kindle edition was very plain with no clues as to what the book entailed. It's actually kind of a nice way to approach a book - no expectations at all.
I loved this. It was so engaging and enthralling. Buck's style of story telling is almost factual. In a story where there is much room for judgement, Buck doesn't. She simply tells what happens and leaves the reader to make up their own mind. For me, at times, this led to conflicting feelings about the characters. At times I was angry at Wang Lung for the way he treated his wife O-Lan or at O-Lan for not being so subservient, but at other times I was touched by the obvious love and respect they had for each other and the way they each played a role in building their lives together. The story travels through the landscape of China, allowing a glimpse into the China of that time. While the time frame is never explicitly stated, it is thought to be set in the early 1900's, around the time of the Xinhai Revolution.
A quick look at Buck's bibliography shows her to be incredibly prolific. This book alone is one of a trilogy and her publishing career spanned over 40 years.  If this is any indication of her other writings, I plan to read more. After talking to my mother, I've discovered that my grandmother was a great Pearl S Buck fan and she was a woman of great taste!
Posted by Unknown at 4:19 PM