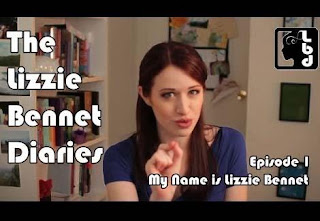 So my final task for the P&P challenge was The Lizzie Bennet Diaries. The LBD (as it will be known from here on in!) is a modern day adaptation of Pride and Prejudice. It's presented as a video blog (or vlog) by Lizzie Bennet, about her life.

I think LBD may have been the catalyst for the whole challenge. It's the first time I've ever watched anything like this, but I can see the appeal and can imagine the form of media has the potential to become huge. Since I didn't watch it live, I didn't get into the transmedia side of things - so I didn't get the characters Twittering or Instagraming or stuff like that. (Thank you to Miss Dove for explaining what Transmedia was!) LBD also spawned spin offs such as Lydia Bennet's vlog and Sandition.
It was really interesting to see how they adapted the story to modern day ideals. I mean really, no modern audience was going to give a toss if Lydia and Wickham ran off to shack up together. The scenario they came up with for that part of the story was extremely well done and fitted the overall tone of the show well.
I think it would have been better to watch it as it was released - too much at once did lead to a little bit of LBD overload!
It has also spawned a new adaptation of Emma, called EmmaApproved. Miss Dove over at Little White Dove, has come up with the Emma Challenge. I have, of course, signed up!
As for now, all I can call the P&P Challenge complete! Yay!
Posted by Unknown at 11:43 AM