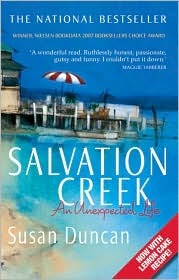 At 44 Susan Duncan was doing well. She was a well known journalist now editing two top Australian magazines, a happy marriage and good health. But when tragedy struck, it struck hard. In the space of 3 days she lost not only her brother to cancer, but her husband to the same insidious disease. She tried to go on, go back to work, hold it all together, but found she couldn't. She quit her job and set out looking for a place in which she would find peace.

Her search led to many places, but none fit. And then she attended a friend's birthday in Pittwater, an area of Sydney largely accessible only by boat. Later she returned here and made it her home.

Duncan still struggled with what had happened. She attempted to return to work, but found she had to quit again when diagnosed with breast cancer. Salvation Creek is her story of struggle and acceptance, of surviving cancer and finding love again.

For me reading about the community around Pittwater was so familiar - it sounds exactly like the island where I live! Close to a city but accessible only by boat. That slight isolation makes for a strong community, freedom for kids and a friendliness I think is hard to find in today's society. I found myself nodding at several passages and thinking "Uh ha, that's it exactly! That is why we live here." A perfect example is a conversation she has with a mother of two kids who live at
Scotland Island.

"Ever get you down? Wear you out"
"Nah. Love it. Kids grow up fast here, but the right way. They learn about swimming, fishing, boats and exploring  before shopping malls and video games."
"Don't you ever long to be able to drive the shopping to your front door?"
"Well, if I could do that, I probably wouldn't have a beach at the bottom of the garden, where the kids can swim all summer. I wouldn't live on an island where they can run wild. I'd rather have the beach and the freedom."

For me, that perfectly sums up what island living is about.

There were times in the book where I thought she would just toughen up a bit. She is in a relationship she is not happy with, doesn't want, but won't break it off, but at the same time I admire the guts it took to quit her job (multiple times!) because it was what was best for her at the time.

On the whole, I enjoyed the book. I enjoyed reading about someone who got the whole island thing. Well worth the read!
Posted by Unknown at 2:58 PM