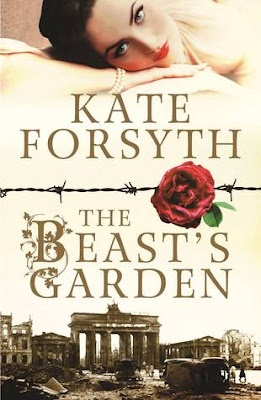 From Goodreads: A retelling of The Beauty and The Beast set in Nazi Germany
The Grimm Brothers published a beautiful version of the Beauty & the Beast tale called ‘The Singing, Springing Lark' in 1819. It combines the well-known story of a daughter who marries a beast in order to save her father with another key fairy tale motif, the search for the lost bridegroom. In ‘The Singing, Springing Lark,' the daughter grows to love her beast but unwittingly betrays him and he is turned into a dove. She follows the trail of blood and white feathers he leaves behind him for seven years, and, when she loses the trail, seeks help from the sun, the moon, and the four winds. Eventually she battles an evil enchantress and saves her husband, breaking the enchantment and turning him back into a man.
Kate Forsyth retells this German fairy tale as an historical novel set in Germany during the Nazi regime. A young woman marries a Nazi officer in order to save her father, but hates and fears her new husband. Gradually she comes to realise that he is a good man at heart, and part of an underground resistance movement in Berlin called the Red Orchestra. However, her realisation comes too late. She has unwittingly betrayed him, and must find some way to rescue him and smuggle him out of the country before he is killed.
The Red Orchestra was a real-life organisation in Berlin, made up of artists, writers, diplomats and journalists, who passed on intelligence to the American embassy, distributed leaflets encouraging opposition to Hitler, and helped people in danger from the Nazis to escape the country. They were betrayed in 1942, and many of their number were executed.
The Beast's Garden is a compelling and beautiful love story, filled with drama and intrigue and heartbreak, taking place between 1938 and 1943, in Berlin, Germany.

Thoughts: Kate Forsyth is definitely becoming one of my favourite authors. I suspect that much like Tim Winton she will not write anywhere near quick enough to sate my appetite, but obviously good books take time to write! In August I was lucky enough the meet Kate Forsyth when she visited the library I work at. Not only was she incredibly interesting to listen to, she was lovely, spending significant time talking to adults and children alike and signing books. She signed my copy of The Beast's Garden which is now so precious to me it will not be lent to anyone! 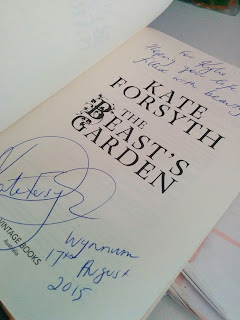 While this book is being publicised as a retelling of Beauty and the Beast, it is actually based on a variation known as The Singing Springing Lark. Regardless, it is a beautifully written with meticulous research into both the fairytale world and the real world. Forsyth weaves her characters into the real life horror of Berlin during World War II. Her characters interact with those who, in real life, actively opposed Hitler and his regime - putting themselves in great danger in an attempt to let Berliners and the international community know what was happening. Ava's involvement with this group while married to a man who is part of the Abwehr - the arm of the Nazi party responsible for providing spies - gives the reader access to the going ons of both the party and the resistance.
Just like the fairytale, the beast turns out to not be so beastly and it's at that point of the story that Ava and Leo's love story truly begins to blossom.
Forsyth's writing brings to the fore the fear and tension of the time. In a place where one misstep easily lead to death, I found myself on tenterhooks for the characters constantly. In an area of fiction that has been mined for stories since the reality of Nazi Germany became clear, Forsyth manages to come at it with something new and original. I have read reviews where people have an issue with portraying Nazi officers as something other than evil, but the reality is there were Nazi officers who actively worked against Hitler and his regime - who did not believe the party line and risked their lives to save lives and bring about Hilter's downfall. Aren't those tales just as important to tell?
I loved The Beast's Garden. It is beautifully written, engrossing and enchanting.