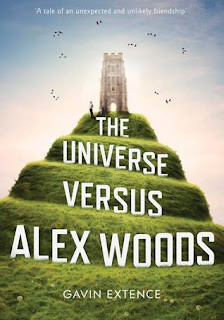 From Goodreads: A rare meteorite struck Alex Woods when he was ten years old, leaving scars and marking him for an extraordinary future. The son of a fortune teller, bookish, and an easy target for bullies, Alex hasn't had the easiest childhood.
But when he meets curmudgeonly widower Mr. Peterson, he finds an unlikely friend. Someone who teaches him that that you only get one shot at life. That you have to make it count. So when, aged seventeen, Alex is stopped at customs with 113 grams of marijuana, an urn full of ashes on the front seat, and an entire nation in uproar, he's fairly sure he's done the right thing ...Introducing a bright young voice destined to charm the world, The Universe Versus Alex Woods is a celebration of curious incidents, astronomy and astrology, the works of Kurt Vonnegut and the unexpected connections that form our world.

Thoughts: OK, so now I want to read Kurt Vonnegut. This is a bit of an issue because usually when I read a book because I read about it in another book I end up sorely disappointed. I don't get it the way the characters do and really, that's just disappointing. But apart from that, I loved this book. Alex is an extraordinary boy. He is intelligent, puzzled by the way the school world works, (why can't others see the value of knowledge??), wise beyond his years in some ways and incredibly naive in others.
Alex's voice in this book keeps it from becoming a rather depressing, maudlin book. His matter of a fact way of looking at things, at analysising the situation stops you from dwelling on the sadness in the book. That's not to say Alex is emotionless, he isn't, he is just able to reason why he is feeling the way he does and accept it.
Any time you get a friendship between an older character and a younger one in a book I feel you have to tread carefully. Extence manages to make the friendship between Mr Peterson and Alex one of equals, but not straight away. Each character stays true to themselves - Alex has to prove himself before Mr Peterson allows him to be anything other than the kid who comes and helps him. It starts as a student/ teacher, mentor type relationship and grows to one of equals. The best bit is the reader doesn't even realise it's happening, it just suddenly occurs to you the friendship has grown and matured.
The Universe Versus Alex Woods takes you in unexpected directions - but that is good. It challenges you to think outside the box, explore your reactions and those around you. It's another read that is easily labelled quirky and for me falls into the same category as A Man Called Ove and The Hundred Year-Old Man Who Climbed Out a Window and Disappeared - left of centre, guaranteed to induce an emotional response and force you to re-examine certain aspects of your life and beliefs.
I listened to this as an audio book narrated by Joe Thomas. It took me awhile to get use to his voice, but in the end it truly suited the character of Alex. Not emotionless, but restrained and logical.

The Universe Versus Alex Wood gets 4 stars