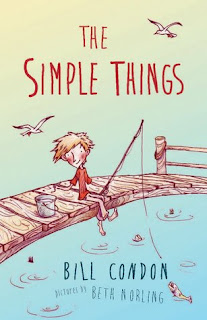 From Goodreads: When Stephen and his parents arrive at Aunty Lola's home, he discovers that his aunt is not only really, really old, but also grumpy and scary. He wants to turn around and go home but his mum says they have to stay until Lola's birthday - three whole weeks away! Will Stephen be able to last that long? Will Aunty Lola?
A book for readers young and old.

Thoughts: This is the second of the Children's Book Council of Australia (CBCA) shortlisted Younger Readers books. Like Two Wolves, it's an exploration of family and it's importance, but from a very different situation. Stephen is very unsure of Aunty Lola, but over time a bound develops that is good for both of them.
For me, this book raised a very good question. Is it ok for older people to be rude? There is much talk of a sense of entitlement from the younger generation, but I see it frequently from the older generation as well. They complain (and Aunty Lola does this) of people being rude and having no respect while displaying these traits as well. The book could lend itself to some wonderful discussion around this, plus our need to make sure we continue to include and think about those members of our family who are older as our own lives become crowded and busy.
This is a lovely book, beautifully written with much to offer.