Book Review: The Girl on the Train 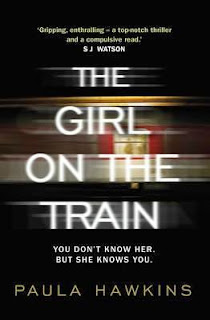 From Goodreads: Rachel catches the same commuter train every morning. She knows it will wait at the same signal each time, overlooking a row of back gardens. She’s even started to feel like she knows the people who live in one of the houses. ‘Jess and Jason’, she calls them. Their life – as she sees it – is perfect. If only Rachel could be that happy.
And then she sees something shocking. It’s only a minute until the train moves on, but it’s enough.
Now everything’s changed. Now Rachel has a chance to become a part of the lives she’s only watched from afar.
Now they’ll see; she’s much more than just the girl on the train…

Thoughts: I was looking for a new audio book and this was one I knew I wanted to read, but also knew it was something that could be continually pushed back for others. I don't know about other audio listeners, but there are some books I'll happily listen to, but others have to be read. This was one I knew could go either way.
After all the comparisons to Gone Girl, I must admit I was a little bit wary. I enjoyed Gone Girl and usually find myself disappointed when one book is compared to another. Apart from the fact that they have similar writing styles I didn'tn find them comparable.
Girl on the Train is told using three different voices - Rachel- a woman who is struggling over the end of her marriage two years ago, Anna - Rachel's ex husband's new wife and Megan - the girl who has gone missing. I must admit I did find myself questioning what each character told me. How reliable is their recount of what happens? Are they telling me the truth or simply putting the best spin on it? And I suppose in that way, I did keep comparing it to Gone Girl, wondering if I could trust what I was reading. Interestingly, I don't think I would have questioned as much is I hadn't read Gone Girl.
About half way through I found myself questioning my judgement of the characters. I was being particularly harsh on Anna, feeling she was being rather horrible towards Rachel. However, when I stopped  and thought about it, I could see where she was coming from. I needed to remind myself that I knew things about Rachel she didn't and if I just took into account what she knew, she was completely justified in her opinions. I did however continue to find her weak and easily exploited by Tom. Personally I would have rung the police long before she did!
At times I was equally frustrated with Rachel and her lack of control and inability to leave things alone, not call her ex, not go past the house. I also struggled with her desire to have back a man who cheated on her.
The Girl on the Train will mess with your mind. If you have read Gone Girl, you will find yourself feeling like you are in familiar territory, but not so familiar you feel like you have already read the book. You will find yourself questioning what the characters tell you. I will happily say if you liked Gone Girl, you will like Girl on the Train.