Book Review: This House of Grief 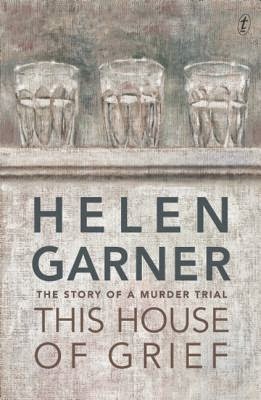 From Goodreads: On the evening of 4 September 2005, Robert Farquharson, a separated husband, was driving his three sons home to their mother when his car plunged into a dam. The boys, aged ten, seven, and two, drowned. Was this an act of deliberate revenge or a tragic accident? The court case became Helen Garner's obsession. She was in the courtroom every day of Farquharson's trial and subsequent retrial, along with countless journalists and the families of both the accused and his former wife.
In this utterly compelling book, Helen Garner tells the story of a man and his broken life. At its core is a search for truth that takes author and reader through complex psychological terrain. Garner exposes, with great compassion, that truth and justice are as complex as human frailty and morality.

Thoughts: Harrowing is a word that instantly springs to mind in regards to this book. Helen Garner sat through and shares her thoughts about the trial of Robert Farquharson, a man convicted of murdering his three sons by driving his into a dam and allowing them to drown.
I've read a lot of true crime books, but Garner is the first writer who manages to not sensationalise or aim purely to horrify the reader. Her observations are thoughtful, heart-rending and have the tone of someone who is truly interested in the truth and at times conflicted by what she sees and hears in the courtroom. It's also a book that examines our jury system, removing any idea of the glamour of prestige Hollywood portrays these trials to be. Instead it shows how gruelling, often boring and frequently distressing they can be.
This House of Grief is a harrowing (there's that word again!)read, but well worth the emotional roller coaster it will take you on.
Posted by Unknown at 8:26 AM