The Kings of Clonmel 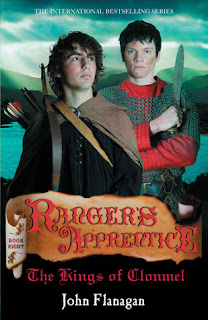 From Goodreads: Will is at the annual Ranger Gathering but Halt is investigating mysterious happenings in the west. When he does finally return, it's with bad news. Hibernia is in turmoil. A religious cult calling themselves the Outsiders are sowing confusion and sedition, and five of the six Hibernian kingdoms have been undermined. Now the sixth, Clonmel, is in danger. Halt, Will and Horace set out to restore order. Can the secrets of Halt's past help them in their mission?

What I thought: Really?? December since I last read one of these books?? Hmmm, not sure I am happy about that!
This series goes from strength to strength. Will, I feel, really comes into his own in the book, making his own decisions, following his own path. Horace too is starting to flesh out as a character rather than playing a supporting role. As I have mentioned before, I think this is one of the best fantasy fiction series for younger readers. My ten year old boy has started reading them and is rocketing through them! I need to read the last 3 before he catches up to me!