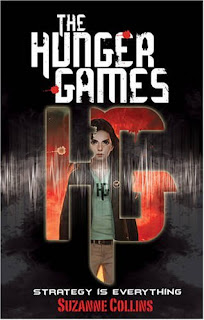 I'd seen several reviews of this around the traps and so I put it on hold at the library. Took awhile to get it as there is apparently a lot of people waiting to read it! It's so popular it's only a two week loan instead of the normal four weeks. Just as well I'm on holidays and could devote myself to it fully!

Set in the future, the Hunger Games are the Capitol's way of reminding the districts that they are in control and to continue to punish them for the uprisings. Each year at the reaping, the name of two teenagers from each of the twelve districts is pulled out. These 24 people are then placed in an arena where the only rule is kill before being killed. Last one standing wins.

I must admit the whole premise of the book is what interested me to start with. The way the story developed kept you wanting to read. You wanted to know how they survived and the greater impact being forced to kill would have on them. In the end of course, the issues are so much more complicated than any of the participants could have imagined. As for the ending? Well it left me wanting more and when I get home, I will be looking up the sequel and putting it on hold too!
Posted by Unknown at 5:41 PM