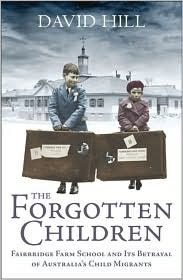 The Forgotten Children by David Hill

Imagine you are poor - really poor. You live in a not so good neighbourhood. You have a couple of children and you worry every day about them being caught in this never ending cycle of poverty. Now imagine someone comes and says "we can provide your child with good food, good shelter and a good education. We will send them somewhere will they will have lots of sunshine and a chance of a better life. Sign this piece of paper and we will send them to Australia and we will educate them and train them to become farmers and farmer's wives. The opportunities are endless." Remember you are poor, you want something better for your kids, and besides, if it doesn't work out, if the kids are miserable, they will be able to come home. You sign the paper. You don't read the fine print. The print that says you have just signed over guardianship of your children and may not be able to get it back.

You stand on the train platform and wave goodbye to your children as they leave to go to the docks to sail to Australia. You are discouraged from going to see the ship off - to distressing you are told, this is what's best. Your heart breaks as you let them go, but you know they are going somewhere better, somewhere they will have a life so much better than the one you can offer them. They will be cared for, educated and given a chance of being something.

This is what many poor parents of English children believed from the late nineteenth century right up until the mid 70's when they signed that piece of paper allowing their children to migrate to Australia without them.

Child migrant schemes were run by Protestant and Catholic churches, as well as child charities such as Barnardo's and Fairbridge. Some of these schemes did deliver what was promised. A better life, education, opportunities. Others tragically didn't.

The Forgotten Children is specifically about Fairbridge Farm School at Molong. The author, David Hill, and his two brothers were sent to Fairbridge in 1959 by their mother under the one parent scheme. They were actually one of the lucky ones. The one parent scheme allowed the children to travel to Australia unaccompanied with their single parent travelling out later, finding a job, establishing a home and then reuniting with their children. Earlier children were sent on the condition that guardianship was signed over to the Australian Government until the child was 21. It was thought by supporters of the scheme that they were saving these children  from failed or irresponsible parents. Signing over guardianship prevented the children from reuniting with their families. Parents who were unlikely to want their kids back were targeted, but many of the parents did not fully understand what they were signing and from it almost impossible to reunite with their children even if they wanted to.

Sadly the reality of life at Fairbridge was nothing like what had been promised. Made to work on the farm from early in the morning and then again in the afternoon, Fairbridge children were sent to local schools, but not encouraged in any way. At Fairbridge they were responsible for keeping the cottages they lived in clean, cooking, cleaning, chopping wood, milking, baking, working in the piggery, gardening, working in the orchard plus anything else you can think of that needs to doing on the farm. Many of the cottage mothers saw the children as their own personal slaves, issuing orders and never showing any affection. Some of these children were as young as 4 and a long way from home. They were separated from siblings and told to toughen up if they cried for their mothers. Aged four. My daughter's age.

This book broke my heart in so many ways. I felt for the parents who tried to get their children back and couldn't. The parents who thought they were sending their children to a better life only to discover through letters it was hell. I cried for the children who were abused, mistreated and destroyed by a system that saw them as labour and things to be used. I despair for those who told their stories to David Hill, whose lives were ruined by a childhood a Fairbridge, who cannot show affection to their own children because they never received it themselves. I mourn the lost years for families, for children who years later found parents they thought had abandoned them only to discover they had tried desperately to get their kids back and were blocked at every turn.

Books like The Forgotten Children are hard to read but so necessary. We need to know about this. We need to acknowledge these children, parents, families and the abuse they suffered. It won't make what they suffered any better, but maybe it will show them that someone does care about them.
Posted by Unknown at 12:34 PM